Share All sharing options for: Clint Mathis With Fire In Ave Maria

"He’s another good character we’re hoping he’ll join us and then the technical staff will be set for the season," he said.

Yesterday, the Fire posted pictures from day three of training in Ave Maria. A commentor on the BigSoccer forums spotted Mathis in a hat lurking in the background of one of the pictures. 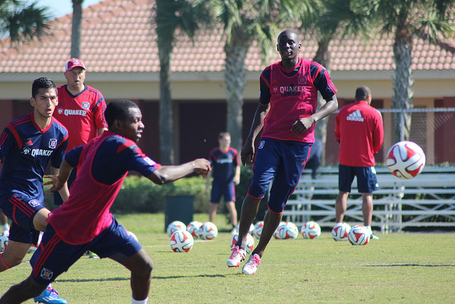 The picture has since been removed from the slideshow on the Fire's website. It is unclear why the Fire are waiting to announce Mathis as the final assistant coach. Perhaps Frank Yallop is bringing Mathis in on a trial basis to assess his coaching ability and to see if Mathis would fit in with the culture that he is setting up at the club.

Whatever the reason is, Mathis has to be pretty far along in the hiring process if he is down in Ave Maria with the team.