Traditional rivals will square off April 2 in Glendale, Arizona

Share All sharing options for: Roundup: USA To Play Mexico In April

The United States Men's National Team announced another tune-up friendly before the summer's World Cup, and it's a doozy - the USA will play Mexico in Glendale, Arizona on April 2.

No word on whether the teams will compete for some kind of cup or trophy. Might I suggest the winner of this cash-grab necessary tune-up exercise should take home a replica of Walter White's money stash? 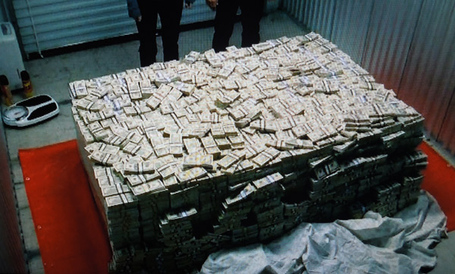 A nice piece by Jonathan Yardley on the Fire's own Benji Joya is up on the league site. In it, Joya talks about growing up in San Jose idolizing Arturo Alvarez (?!), playing against Mexico in Mexico as a Mexican-American, and the positive influence U-20 coach Tab Ramos had upon Joya's game. It's good stuff - read it.

Another feature on the league site about the Fire, this time focussing upon the four starting-quality centerbacks on the roster. The money quote comes from C.J. Brown: "For the past few years, or last year at least, that back line didn't have competition. It was just that back line. Now, we brought in competition, so I think everybody's going to be raining hard every week, putting in the work that's necessary for the weekend. It's going to be a very hard decision for us to put a starting four on the backline."

Galaxy fans are probably delighted to see Lando declare, in Spanish-language interviews with MedioTiempo.com, that he'll end his career in LA. MLS power-brokers are probably less enamored of some other thoughts he shared, primarily this bit on player development in Mexico and the USA:

"In my opinion, the youth in Mexico is better than ours," Donovan said. "We're looking for ways to improve it, but for me Mexico is one of the best in the world at that kind of progression, with youth, and with the national team it's almost the same forever, and I think it will continue to be for a long time."

Clyde Simms announced the end of his playing career yesterday, some nine years after entering MLS with DC United. Simms, 31, still could have been a useful squad player, but was forced out due to declining kidney function - the defensive midfielder suffers from Focal Segmental Glomerulosclerosis, also known as "the disease Alonzo Mourning has." Simms ends his career with 221 appearances, three goals and nine assists.

Goal.com's Thomas Floyd takes a look at the proposals to move the MLS schedule to a fall-to-spring schedule. A nice read while one gazes out at the 20 inches of snow still blanketing the earth just outside one's window.