For those of us wishing that the club would return to its roots and bring back some tradition to the home kit this season - white stripe instead of navy? - disappointment, disillusionment, maybe even rage is likely if the leak at footyheadlines.com is true. For your viewing pleasure, here is the leak I'm referring to, your Chicago Fire 2014-15 Home jersey: 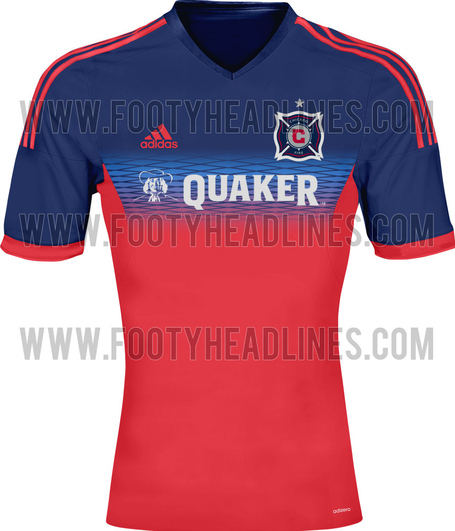 What's that? Yeah, my thoughts exactly.

If this holds up to be the actual home kit for the 2014 and 2015 seasons it just shows that this club is trying to move away from its past, methodically, year by year under the current regime. I don't understand why our owner does not want to have a connection with the traditions that this club was built on. This design completely loses the design connection to the Chicago Fire Department and the tribute that the jersey was originally designed for. It just seems that by going this way we have just given up on trying to keep our original identity, and clearly not for a new, badass design.

[EDITOR'S NOTE: I think I accidentally mocked this jersey up in 1994 using some kind of invitation-creation software. If time travel is possible - and this jersey might prove that it is - it's not too late for us to go even futher back in time and prevent the 1994 me from firing up that software!]

What do you think? Please try to keep the comments as clean as possible.