Around the Campfire: Community News, Feb 2014

Share All sharing options for: Around the Campfire: Community News, Feb 2014

As the winter fights on like a cornered badger, and glimpses of the spring-to-come are just fleeting teases to Chicagoans hibernating through the cold, soccer in Bridgeview still seems far away. Luckily, Fire players have begun their training in the sunny southern states that provide a friendlier climate for outdoor football. With the young talent that Frank Yallop has brought in putting on a show as the club gets ready, there is a lot to be excited about. As supporters begin to dust off their weekly planners and schedule their time for the season upcoming, there are several off-the field activities to keep in mind.

It’s not too late to go! The Fire's 16th Annual Season Kickoff Luncheon is scheduled for Tuesday, March 4th. The event will begin at 11 a.m. in the Regency Ballroom at the Hyatt Regency Chicago. The Luncheon is a charity event benefiting the Chicago Fire Foundation and is a terrific afternoon for all who attend.

As noted in our January edition of Around the Campfire, the event is the first opportunity to meet the 2014 team prior to the start of the season. In addition, this event will feature the unveiling of the new 2014 primary kit. Tickets are available by calling (708) 496-6751 or at this link.

It is too late for the early bird discount, so tickets now start at $90 per a person or full tables seating 10 guests for $850.00. The first 20 tables that pay $1,000 will be seated with a Fire player or coach while those tables last. 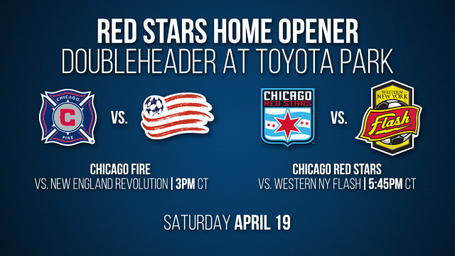 Still unsure about the Red Stars, but you think you might be interested? You are in luck! On February 11th the Fire announced that they would be hosting the Chicago Red Stars in an April 19th doubleheader at Toyota Park! On Saturday the 19th come out and see the Fire take on the New England Revolution at 3 pm and stay to watch the Chicago Red Stars take on the Western New York Flash at 5:45 pm. This event should make for a terrific, fun day of soccer.

Excited for opening day on March 23rd?! Why not get to the first Fire home match a bit early and enjoy tailgating with the Independent Supports’ Association and section 8 fans? Hardcore fans arrive for the beginning of the tailgate starting as early as 10 am at the Harlem end of the Toyota Park parking lot. The first tailgate will be serving BBQ from Acme Jim’s.

The tailgates are usually sponsored by a variety of independent supporters’ groups who watch within the section. Proceeds help the non-profit group afford all of the materials and resources needed to make section 8 one of the most successful soccer supporters groups in the country. For more information of tailgates check out the Section 8 Chicago website.