Fire kick off at 2 p.m. Sunday against a Portland side they've never defeated in MLS play

Past: Hey, What Happened?

Last Sunday the Fire travelled to LA to take on Club Deportivo Chivas USA in the season opener. High hopes are a natural by-product of a successful preseason, and most folks figured that three points were the likeliest outcome against Chivas.

Well, let's just say that problems from the old regime reared their ugly head. After falling behind 2-0 early in the second half, Yallop's crew fought back to tie the score through goals from Benji Joya and Quincy Amarikwa. Then a missed mark on a corner late in the game let Chivas' Bobby Burling get his head to the ball for the game winner. The withdrawal of an ailing Chris Rolfe for Logan Pause minutes prior to Burling's winner seemed a white-flag type of substitution. Defensive miscues, falling behind, and bunkering for the draw is what happened versus Chivas USA, and it seemed as though Frank v1.0 never left.

This week the Fire continue their west coast adventure, now heading north to take on the Portland Timbers. Blessed by many (even myself) as the team to beat this year, Portland is coming off a 57-point season in 2013 and have been able to add quality in offseason to an already solid corps of players heading into 2014. The addition of two Argentines - forward Gaston Fernandez and defender Norberto Paparatto - as well as Sounders castoff Steve Zakuani, Portland has really strengthened their roster as they look to build on their 2013 season in Caleb Porter's second year.

Last week, the Timbers had to wait until the last few seconds versus Philadelphia to secure a point in their season opener. That goal came from new attacker Fernandez on what was literally the last attacking chance of the game.

The Fire come in to Portland looking to change their winless all-time record versus the Timbers. The last time the Fire had to travel to Portland was in 2012, and they lost by the scoreline of 2-1. Yes, that was 2 years ago, pre-Porter, and much has changed. 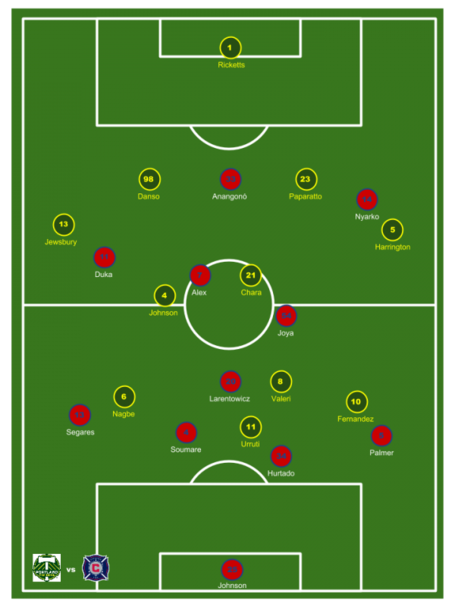 Future: Hey, What Needs to Happen?

In order for the Fire to take home all three points from the Timbers, they'll have to play a lot better than they did last weekend - fairly obviously, one supposes. Over the years, international players coming into MLS typically don't like the physicality of the league. This is why the Fire have to play a tough game, and not be afraid of pushing around the Timbers attacking players. They should knock around players like Valeri, Fernandez, Nagbe, and Urruti. Keeping it simple with no more than two touches on the ball should be a game plan for the Fire. Keeping possession with quick, simple passes, the Men in Red should be able to do what the Union did to the Timbers last Saturday.

Limiting defensive mistakes is a must if the Fire are to keep three points within striking distance. They cannot afford to miss marks on set pieces or give away possession easily in the defensive third of the field. Sound like a lot to do right? Well, if Yallop wants to get his first three points while at the helm of Chicago, his team must play a very, very good game.

As I look into my crystal ball, this game is starting to remind me of the third game of the year in 2013. Remember that one? It was the away trip to SKC, and it finished tied at 0 with SKC enjoying ~72% of the possession while the Fire Fire did very little offensively.

Why do I say this? Well, so far all signs are pointing to Yallop deciding to play for the draw. During his weekly press conference, he said that Magee may not be ready to start, and that Rolfe and Duka are nursing injuries. That's three key offensive players that may miss the game, which means you would have to insert some of the "kids" into the lineup.

I believe that we will see a 4-2-3-1 lineup, with the only changes being that Rolfe and Duka sit and in their places we will see Joya and Pause. Pause will line up next to Larentowicz, while Joya will take Rofle's spot in the middle. There is the chance that Yallop may choose to sit Anangonó in favor of Amarikwa due to Anangonó's lackluster showing against Chivas USA.

This game will come down to who controls the middle of the field - and, unfortunately, Portland has too much talent. The Timbers will be able to control the game through their spine of Will Johnson, Diego Chara and Diego Valeri. This will limit the Fire's offensive chances, and Yallop may have to get creative in order to have a fighting chance at picking up any points on Sunday. I see this one ending 3-0 in favor of the home side as they will prove to be too much to handle in all facets of the match.

I just hope I'm wrong about this one and Yallop figures out how to find success versus the Timbers.

When: Sunday March 16th at 2PM

Where to Watch: My50 Chicago, Unimas, TWCSC Wisconsin