Words About Shapes: The Swashbuckler & The Cutpurse

In the second of a series about the Fire's tactical look for 2014, Sean Spence examines CF97's defensive plan

Share All sharing options for: Words About Shapes: The Swashbuckler & The Cutpurse

Penn & Teller have built a surprising show-biz dynasty on a simple formula: Penn - the big guy - talks a lot, waves his arms around, and is generally garrulous and attention-seeking, while Teller, the smaller sleight-of-hand guy, pulls off subtle tricks and keeps the whole act moving. It's not a complicated concept, but it works wonderfully well, largely because it turns each man's weaknesses (being an insane babbler, for instance) into leverage for his partner's strength (flourishing when attention is diverted, for instance). Penn & Teller continue to thrive because they have found a way for their personalities to inform and reinforce their work.

Turning the Chicago Fire's defense into an effective unit, just a few months removed from team-record incompetence, may seem like a magic trick straight from a Las Vegas show - up next, Frank Yallop will attempt the death-defying Shark Tank Escape! - but preseason has given us a glimpse of how he plans to pull it off. 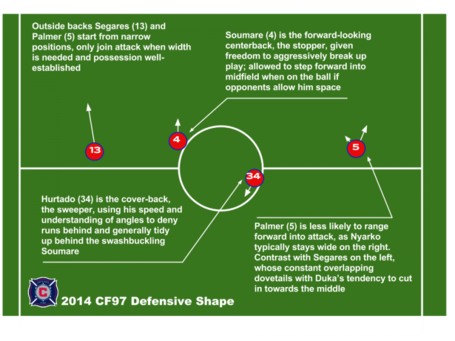 In yesterday's first of this series, we discussed the basic precepts of the Fire's 2014 4-1-4-1: Compactness, high pressing, fluidity and narrowness; of those, fluidity has little to do with defense, and can be safely ignored for today's discussion. The other three, however, say a great deal about how the Fire intend to play.

Compactness dictates that the team should keep its lines as tight as possible to limit the space for opponents to play through midfield, and high pressing means Chicago will try to disrupt opponent's possession as close to their goal as possible. Together, they indicate that the defense must think together to play as high a line as possible, since the attacking unit is likely to have their hands full pressing. Unlike the loose, deep line we have grown accustomed to in the last several years, expect to see the Fire defense pushing up as a part of the scheme.

The typical assumption, then, is that CF97 will look to play runners offside by keeping a disciplined flat back line, but that assumption would be quite wrong, as I am about to discuss.

In the center of the Chicago Fire defense, Bakary Soumare is our Penn Gillette. The massive and surprisingly mobile Malian has been given the keys to the defense by Yallop, and is encouraged at every turn to express himself. In classic American soccer parlance, Soumare is the stopper, the centerback whose job it is to step strongly forward into challenges, attacking moments of mis-control or indecision. If the target striker is a battering ram, than Soumare is our door of made of iron-bound ash, hard and indomitable.

There's more than defense to Soumare's role, though. In a league increasingly dominated by single-striker sets, he is given a great deal of freedom to stride forward with the ball, should space be offered to him. In preseason, the effect of Bakary's growing confidence was remarkable, as his game seemed filled with swashbuckling verve not seen since his salad days in 2008. His tendency to spray 70-yard outlets to the wings can be difficult to fathom when it's not working, but when those passes hit, the transition from defense to attack is irresistible.

Of course, Soumare can enjoy all of this freedom because, like Penn, he's got a quiet little cutpurse sweeping up behind him, cleaning up all the little mistakes. Jhon Kennedy Hurtado was the key piece of the trade which sent Jalil Anibaba to Seattle, a pure cover-back whose profile has been besmirched by two years of inconsistent play after a knee injury. Here, like Soumare, Yallop is putting him in a position to play exactly his game. Hurtado goes about his business quietly, erasing nascent chances before they develop into much.

As sweeper to Soumare's stopper, Hurtado is tasked with covering that great void behind the defensive line. His first step is almost always back towards goal, and his reading of runs and space is fantastic. The bread and butter of Hurtado's game is turning as a runner tries to get behind, reading the pass before the attacker can, and calmly dinking it out of play.

One interesting point is that the Fire, despite the high line, do not seem to be trying to consciously work an offside trap. Instead, they press high, focus on spacing with the midfield, and Hurtado tracks runners in behind - any offsides are generally the result of a run started far too early, not any organizational shenanigans from the Chicago defense.

The fullback's roles are a bit simpler than the centerbacks' two-man game. Neither is asked to bomb forward wildly into attack, as the defense tends to stay a four-man unit until possession is well-established and deep in the opposition end. The tendency to play narrowly invites opponents to try to quickly transition into the wide areas, which may explain the conservative runs of the fullbacks - by staying home, they force those attempts at a wide counter-attack to be inch-perfect, a prospect made more difficult by the pressure applied by the Fire attackers. In essence, the fullbacks are three-quarters defenders, coming forward as wide outlets or combo partners to the wings in the second phase of a Fire possession.

Of the two, Gonzalo Segares is by far the most attack-minded, both by inclination and by tactical necessity. Segares, now aging past the ability to play as an out-and-out wingback, still has a lot to offer on the left flank, and the tendency of left winger Dilly Duka to cut to the inside means Sega's support is crucial on that flank. On the right, Lovel Palmer is a defensive midfielder playing right back, meaning his positioning and tackling are on point, but his crossing, uhhh, isn't. This is less of an issue, though, as right winger Patrick Nyarko thrives in the wider areas on the right side of the pitch, meaning Palmer can stay at home without the team sacrificing width in attack.

In tomorrow's edition of this four-parter, I will look at the roles and responsibilities for the 2014 Fire midfield. Until then, chime in with your observations!