USA v Mexico: 5 Reasons to Stay Up Way Too Late

It may just be a friendly but it is well worth staying up to watch the 10 p.m. central time kickoff. Forget feeling energized for work or school the next day, you have some Julian Green to watch.

Share All sharing options for: USA v Mexico: 5 Reasons to Stay Up Way Too Late

It is 10 p.m. central time on a Wednesday and we all work for a living. Staying up for roughly two hours until the clock turns to Thursday is generally an undesirable prospect. Sure, it could be worth it for a World Cup game, a Game 7 for a championship in any sport or any episode of Breaking Bad. A late night like that means a gallon of coffee the next day.

Ask me if I want to watch something called a 'friendly,' a glorified exhibition, at that hour and I would generally laugh at you until that laugh unintentionally becomes a yawn and I pass out on the spot.

But this is no ordinary friendly. This is an unfriendly. It's Mexico vs USA. It's the last game before Jurgen Klinsmann must select an initial World Cup roster. Did I mention it's Mexico vs USA?

If this game started at 2 a.m. central time, I would watch it. Friendlies can be tough to get up for but every American soccer fan should tune in Wednesday. A preview of the game will be coming for our loyal readers at Hot Time in Old Town, but I am here to pump you up for the game and give you the excitement and energy you will need for the late start just in case your Mt. Dew doesn't get the job done.

1) Mexico and USA always matters. Mexico is awful at returning our acts of goodwill.

Oct. 15, 2013. US midfielder Graham Zusi nets a stoppage-time goal against Panama in one of the greatest moments in Mexico soccer history. That's right. The goal was meaningless for the U.S. who dominated the Hexagonal to qualify for the World Cup. Mexico, however, was lost for most of its journey to the World Cup. Good old El Tri went through three coaches during the 10-game qualifying campaign winning a whopping two games and scoring seven goals.

The 2013 Chivas USA team may have been able to perform better.

With Panama threatening to make its first ever World Cup and Mexico once again trailing in a qualifying match 2-1, this time against Costa Rica, Mexico needed a miracle. Zusi answered that prayer and became an instant legend in Mexico soccer. Observe: 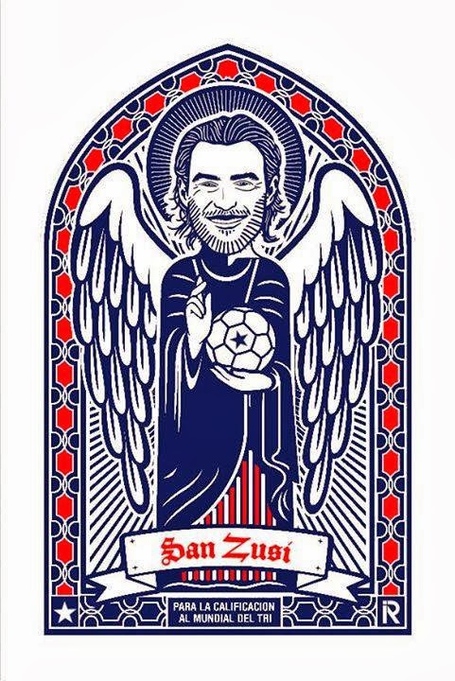 So how was this completely unnecessary and overly generous gift repaid? By Liga MX team Puebla preventing Klinsmann from bringing in DeMarcus Beasley and Michael Orozco, thus preventing the U.S. from getting a look at its top-choice back four.

That's how Mexico wants to play this, huh? Fine by me. Add fuel to the brilliant fire of this rivalry. But be warned El Tri, your savior can also be an unforgiving one. Graham Zusi giveth; Graham Zusi taketh away.

There's not much left to write about Julian Green that's different from what you have already read. The hype and speculation comes to an end Wednesday. After all the tales of his glorious skills, the first chapter of the future legend's career begins fittingly against America's biggest rival. I doubt he starts and that is even better from a viewing perspective.

After 60 minutes of soccer with a halftime to break up the action, your eyes may begin to grow weary. Then, like a shot of adrenaline injected directly into the heart, Klinsmann brings on Green and the crowd in Phoenix grows crazy. I plan on leaping off my couch and throwing streamers at my television.

The whole debut is even more exciting because no one has really seen him play, unless you live in Germany or something and really love Bayern II. Other than that it has been a mere smattering of short YouTube clips. I don't know exactly how I am going to feel, but I would assume it will be similar to the first time I saw a panda bear in real life.

3) Fight to the death! (for roster spots) May the odds be ever in your favor (except you, Eddie Johnson)

Friendlies are always a chance to prove your worth and earn a spot for one of the big tournaments or important games. But the stakes are raised here. It's Klinsmann's last look. It's the friendliest friendly (assuming that means biggest).

I am choosing to watch DeAndre Yedlin and "LOL" Eddie Johnson. Yedlin has pretty much no shot of making the roster but he is young and has been impressive with the Seattle Sounders in his short time as a professional. The Americans are generally strong at developing defenders so it is a tough nut to crack when you look at the quality ahead of him. If he has a strong showing, I would think he would immediately find himself on the short list for the next Gold Cup squad. Beasley isn't getting any younger.

Don't be surprised if Yedlin is rocking red, white and blue hair because he is DeAndre Yedlin.

Making fun of Eddie Johnson is one of my favorite things to do, but he is one of us. He's like the sibling you pick on but run to defend if anyone else dare do the same. With that said, I really want to see him have a strong performance Wednesday. Let's face it, America is not known for producing many goal-scoring machines. Jozy Altidore and Aron Johannsson seem to be the clear top-two men up front but I think EJ could sneak into the final roster. The team could use all the scoring options it can get.

The Team Euro edition of the U.S. Men's National Team left us all with a bad taste in our mouth. They were playing a team from a country that was in a literal war on its home soil and still ended up losing in pitiful fashion. Soccer is only a game and I can see how something as serious as war and riots would be distracting, but you would think the team with the guys who had families directly affected by it would be the ones to falter.

The Team North America edition of the U.S. team gets a chance to redeem that result and leave us all feeling better about life heading into World Cup season with a win over our rival. That alone is probably reason enough to stay up to watch the game. Unless you have one of those memory blaster sticks from Men In Black. Then you could just go that route.

The Fire goalie is on the team. Sure, he might not play at all but you might see him on the sideline. Analysts might talk about him. He may be completely invisible, who knows. One thing is for sure. If he gets into the game, he will be on a team that has the ability to clear the ball out of the box on corner kicks.

Supporting Sean Johnson should be worth the sacrifice of precious sleep.

Feel free to share what your reason to watch the game is (I'll argue with you if you say something about panicking if Dempsey/Donovan struggle) and be sure to check back at Hot Time in Old Town as we'll have you covered before and after the game.