When: TODAY at 3 p.m.
Where: Toyota Park, Bridgeview, IL
Where to Watch: Toyota Park stands, NBCSN

It has been five weeks now and the result has been the same. Undefeated in five yet winless, five straight draws, and only five points out of a possible 18 to start the season. Last week the Fire travelled to Montreal to take on the Impact with familiar results; the only difference was that the opposing team scored first and the Fire had to make a comeback. Yet again a defensive miscue led to the opposition's goal - Hurtado pushed too high up, which allowed Jack McInerney to get in behind the defense and slot one past Sean Johnson. The Fire's equalizer came off the foot of Quincy Amarikwa, but it was a scrappy play - Harrison Shipp's corner nodded off the crossbar by Jeff Larentowicz, then falling to Magee who slid the ball back into the mixer from just outside the 6-yard box, tying the score at one. That is how the game ended; a tie ... again.

This week the Fire welcome long time rival New England to Toyota Park. The Revolution come to Chicago on the back of an impressive victory over the Houston Dynamo. Even though the score line was 2-0, the thing that was impressive was that New England to zero shots on target, while the Revolution took 13 shots with six on target. To hold Dominic Kinnear's Houston team down in that manner is pretty impressive, considering what Houston has been able to accomplish over the past few years - but was it a hangover from the Dynamo's Texas derby meltdown against Dallas?

The New England goals came from full back Kevin Alston and Honduran international Jerry Bengston. This Revolution team was supposed to be fighting for of the top spots in the Eastern Conference finishing third in 2013 with a young, growing squad. A slow start to the 2014 season has seen them only score 4 goals total - one an own goal from an opponent - while conceding 8, which has led them to having a 2-3-1 record.

Hey, what should happen?

I wouldn't consider this a must-win game, but in terms of momentum going into a bye week, and pleasing a fan base that needs a boost, a win would do wonders.

In order for the Fire to take all three points, they are going to have to watch the Revolution wing backs. New England's wing backs love to get forward and join the attack - Alston was one of the goal scorers last week and he took a few shots as well. Pair the forward-leaning tendency from the defensive flanks and the continued absence of talismanic centerback Jose Goncalves (the 2013 MLS Defender of the Year), and the recipe comes clear: The Fire should be able to use the wide spaces to trigger quick counters against a stretched, inexperienced center back combination.

At the same time, Patrick Nyarko and Shipp will have to track back on defense or the Fire risk getting flooded in the attacking zone. This is something that the Fire can exploit as long as they can deal with it on the defensive side of the ball. Like I have said the past few weeks, Chicago has to clean up defensively. Last week it was pushing too far forward and letting an Impact player in behind the defense; in the weeks prior it was set pieces and more set pieces. If the Fire can hear the final whistle peep without giving up a goal worthy of a facepalm, they should win; if not, it's time to consider serious changes. It's getting a little late to keep talking about it being early. It will be interesting to see what happens if defensive lapses continue on Saturday. 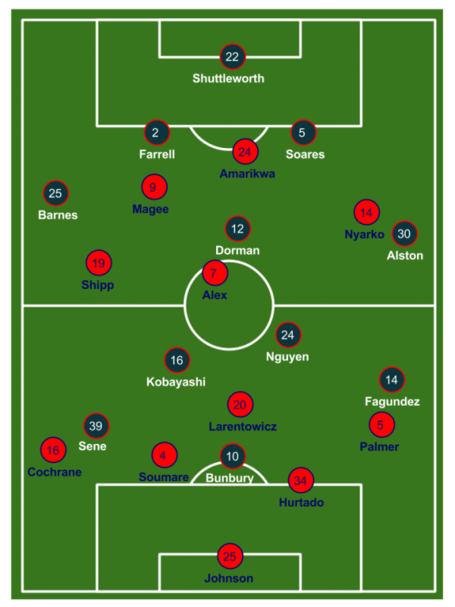 The Fire want the three points this Saturday but will they be able to get them? This game looks like a win at first glance. New England's defense hasn't played particularly well so far, and their offense is even worse.

The first goal will likely have a lot to say about how this game plays out. Should the Fire score first, they should be able to counter at speed against New England's high pressure, especially in taking advantage of the space left by the Revs' marauding wingbacks. If A.J. Soares has to sprint toward his endline often, Chicago is in good shape. On the other hand, after conceding first against Montreal, the Fire were quite vulnerable to late runs from central midfield, which is bread and butter in New England's maniacally attacking 4-1-4-1.

Consider the expected XI for the Revolution: The attacking four-band consists of an inside-out wing forward (Diego Fagundez), two smallish, supremely clever attacking midfielders (Lee Nguyen, Daigo Kobayashi), and Saer Sene, a physically gifted and imposing striker playing off the right wing. Nothing about that lineup suggests a team looking to soak up pressure; half of the field players just aren't into tackling! In the midfield, Lawrentowicz will have his hands full, and his communication will be crucial as the Fire try to mark up against the New England attack.

Going the other way, the Revs' attack-mindedness could open things up for Chicago. While the Fire have spent most of the early season working on keeping the ball, compressing space and playing possession, this is still a roster with counter-attacking football in its blood. The Revs' inexperienced back line against the mental acuity of Magee and Shipp and the pure, simple pace of Nyarko and Amarikwa - this game should be an end-to-end thriller if both teams show up to play.

That said, I'll say 1-1 for my prediction. I really hope I'm wrong this week, and the Men in Red are able to take all three points.