Chicago host the last undefeated team in the league; each team enters having played well, but not won, in last outing

When: Saturday May 3rd at 7:30PM
Where: Toyota Park, Bridgeview, IL
Where to Watch: Toyota Park stands, My50 Chicago, TWCSC Wisconsin
Hey, What Happened?

Last week the Fire didn't lose, they didn't tie, but they didn't win either. That's what happens when you're on a bye week. At least the Fire had extra time to work on the areas of their game that they needed to work on. Set piece defending, high pressing tactics, goalie distribution, and especially penalty kicks were hopefully worked on. Those were things that were in their control, what was out of their control was the fact that the results around the league saw the men in red slip to the bottom of the Eastern Conference.

This weekend the Fire welcome the last undefeated team in the league, Real Salt Lake, to Toyota Park in a matchup that could see the Fire get their first win of the season in front of the Fire faithful. While the Fire were on their bye week, RSL uncharacteristically blew a 2-0 lead to Vancouver in the last 5 minutes. After taking an early 2-0 lead within the first 10 minutes of the game, RSL then battered away at the Whitecaps goal for most of the match until a Nick Rimando mistake gifted Vancouver their first goal in the 86th. Vancouver then tied it up in extra time, leaving the home crowd stunned and silent. To say this is not the usual outcome for the Royals is a vast understatment. 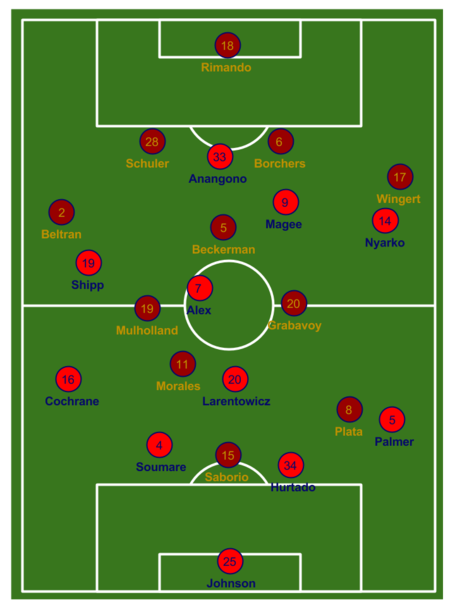 Getting healthy: Both teams will have no new injury concerns heading into Saturday's match. The good news for the Fire is that left back Gonzalo Segares made it through 45 minutes of a reserve game last Friday; his recovery from a high ankle sprain continues, and he should make the gameday 18 for the first time in weeks. Dilly Duka has returned to training but may not be at full fitness for Saturday. For RSL, influential striker Robbie Findley will likely be missing, but other than that no real injury concerns; even if Findlay were healthy, he'd not crack the RSL XI.

Midfield control: The main focus for Yallop and company is to slow down and limit Javier Morales and Kyle Beckerman's influence on the game. The majority of RSL attacking plays go through Morales, whose ability to find pockets of space and exploit them is among the best in the league. Beckerman has become one of the best holding midfielders in the league; most of the best at that position are water-carriers, but the dreadlocked one has vision and passing range to jump-start the Royals offense as well. In order for the Fire to have a chance at taking all three points, they have to control those two players. Larentowicz is going to have to mark Morales tightly and Magee/Alex or whoever starts at the forward central mid position will have to keep Beckerman occupied and also make him work hard to disrupt the Fire attack.

Exploit width: Who will use the wide areas? The Fire have played a narrow 4-1-4-1 for most of the season, with the flank attackers spending most of their time pinching in to help possession, while Salt Lake are the league specialists in the 4-2-2 'skinny diamond.' As a result, the center of the pitch is likely to be a no-man's-land, with little space to settle the ball and play. Which team will get something out of the wide areas? Each team starts one attacker who is deadly out wide with the ball at his feet; the Chris Wingert v. Patrick Nyarko and Lovel Palmer v. Joao Plata matchups could be crucial to the outcome.

Thunder and lightning: The Fire defensive corps will have to be on their toes when it comes to RSL's attackers. Alvaro Saborio is a classic power forward, and has proven to be one of the best scouting finds by any MLS club. Don't let the size of Joao Plata fool you, because his speed and technique can burn almost any defender in the league. Both are good off the ball, frequently pulling out wide in order to create space for Morales and the other midfielders in the center near the top of the box. There has to be constant communication in the back, from Sean Johnson to all of the back four and between the back four themselves. If not it can turn into a long night for Men in Red.

Get at the backline: The Fire have created chances in every match, and their movement and verve will be needed against a physical, conscientious backline of RSL. That said, Salt Lake have given up multiple goals three times in eight outings this season - clearly it is not impossible to break through. Chicago must recognize when the moment is ripe and be ruthless.

One thing is for certain: With Quincy Amarikwa out of the lineup for Saturday, someone has to come in to provide that spark, that blue-collar work ethic. Will 'Magic Mike' step up to the plate, or will it be Juan Luis Anangono, or even a wild-card selection like Benji Joya? Someone has to in order for the Fire to walk away with any points Saturday night.

Prediction: I actually see this game going 2-0 in favor of RSL. Their attack will prove to be too much to handle and the Fire will be unable to create any quality chances.