The game, played under a roiling, rainy spring overcast, seemed tailor-made for voiceovers from John Facenda, his basso profundo making everything sound like the Four Horseman by Grantland Rice: "The winners on the night were the visitors, Chicago's own RWB Adria, who scored with the last kick of regular time and forced the game to penalty kicks. Under the slate-grey sky, the more experienced Croatians held their nerve and won the shootout, 3-1, after a 2-2 draw in 120 minutes of a game that felt increasingly like war." (Then everyone could write about how Facenda compares everything to war; good times.)

The teams could not have been more different. Detroit City was founded a mere two years ago; in that brief span, this collection of unpaid college players has become the primary gravity well for soccer passion in southeast Michigan. "We're ruining football and we don't care!" the Northern Guard sings gleefully, but of course they don't mean it. What they mean, in the ironic inversion typical of our time, is something far better: They're saving football, and they couldn't care more. By the time the game kicked off, their numbers were over 600 and climbing.

In contrast, RWB Adria is a Croatian amateur side founded in 1959 that plays mostly in leagues around the Chicago area, along with the occasional Croat soccer get-together. They considered themselves longshots, and brought a small family of supporters.

"I don't know, I'm very proud of the guys," Adria manager Ante Loncar said after the win, all the while smoking and laughing with fans in Croatian. "This is pretty great. We thought we'd have a chance, but we just got done playing indoor. We seriously have practiced maybe twice outside." The Adria (which is short for Adriatic, the sea which borders Croatia) crowd was tight-knit but far-flung, with a friendly group of rivals from Windsor, Ontario showing up in tribal solidarity.

The football on offer was scrappy and unlovely, the futbol equivalent to three-yards-and-a-cloud-of-dust on the gridiron. Even without Facenda's gravitas to lend the proceedings heft, the game was fascinating. DCFC's initial exuberance was greeted with howling delight by the Northern Guard, who repeatedly warned that "There's gonna be a party in Detroit - no one's sleeping tonight" while the drums pounded out rhythms that vibrated through the aluminum stands and the people standing on them. Adria responded calmly, trying to feed massive target man Vlad Baciu at every opportunity. It was Baciu who broke the deadlock in the 16th minute, finishing a knockdown header off a corner kick with simple aplomb, and the visitors led, 0-1.

"It was my fault," DCFC coach Ben Pirmann said after the game. "I didn't have them ready to go. We weren't ready for kickoff, and that first 15 minutes we weren't ready to play.

"It's disappointing, because we think we've got a talented team here, but it is what it is. We've only had, like, two and half practices. A couple of these guys have only trained 45 minutes with the team. It's tough." 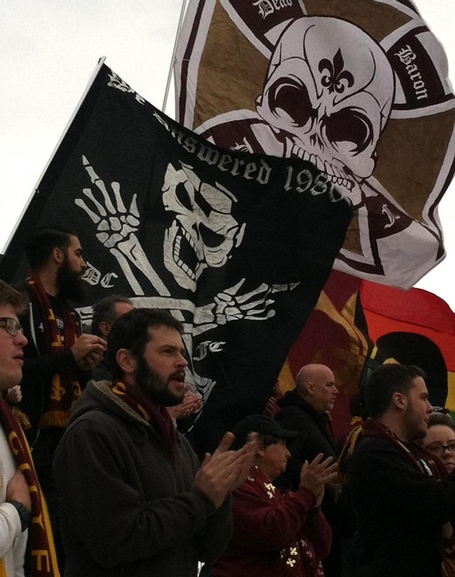 There's a few things about the Northern Guard that set them apart from the burgeoning mass of American supporters' groups. The first - and most likely the thing most visitors would notice - is that, despite the presence of several families in their midst, they are loudly, hilariously vulgar, and use profanity with a ferociousness and familiarity that is almost admirable. The Northern Guard is where family-friendly entertainment went slumming and got stomped biker-style into an intensive care ward. Their iconography marries fleur-de-lis with skull-and-crossbones themed pirate flags. When the opposing team is introduced, they turn their backs and raise their middle fingers toward the field, fists clenched in cheerful tribal hatred.

Their joy at success is infectious. Detroit City continued pressing hard and running at Adria, sniffing out a few half-chances, until Tyler Arnone ran onto a skidding cross in the 71st minute and finished far-post to tie the game. The eruption of drumming, singing and creative profanity had not abated when Kevin Taylor - an older hand, whose career in the lower reaches of American soccer spans more than a decade - lost his mark on a corner kick to head City into the lead. With 13 minutes to play in its first-ever Open Cup match, Detroit City had the lead, 2-1.

The goal came with an unusual record: Longest span between goals in Open Cup play. Taylor, then a 20-year-old prospect, scored for the Michigan Bucks in the early rounds of the 2003 Open Cup, so this goal marks his second in the tournament, almost precisely 11 years after the first. 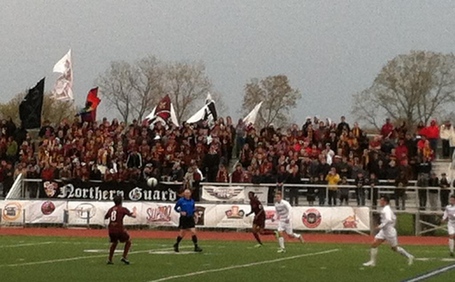 "Blow the f--king whistle! Blow it! F--k you, you f--king c--t, blow the f--king whistle!" The game was easily five minutes into final stoppage time when Baciu struck again, like before cleaning up a scrum around the box with a simple, calm finish - ripping a rebound into the roof of the net forcefully enough to unseat it - to tie the game, 2-2. The previous 15 minutes or so had seen the game's intensity grow beyond simple sporting pleasure and into a territory of personal vendetta; the players responded to the live-wire intensity of the supporters by taking fouls as personal affronts, with all the vengeance and retribution that attitude promises.

Once Baciu's finish signalled overtime, Northern Guard flirted with madness - the game should've been over prior to the tying goal. "I'm blind, I'm deaf, I want to be a ref," they chanted, innocuously enough, while the supporters who'd filtered out of the stands to stand at the fence produced an avalanche of abuse for the officials they felt had screwed them. "You shouldn't be alive, ref," one guy repeatedly shouted. "How much did they pay you? YOU SHOULDN'T BE ALIVE."

Each side had chances to take the lead very early in extra time. RWB Adria had a decent penalty shout turned down three minutes in, then William Mellors-Blair of Detroit City had a clean look at goal twice in 60 seconds - the first shot sliding just wide, the second chance coming to nothing after a rough first touch. Shocked by the speed with which the game was hewing to one end and the other, each team pulled back after the first five minutes, and the game stalled into a brief chess match as everyone rested on the ball. The Northern Guard, meanwhile, redoubled its efforts, and the players, stung into action, had to do something.

Perhaps it is inevitable, then, that a game played in this stew of emotion became a barely-controlled leg-breaking contest in the waning minutes of extra time. Marin Vucemilovic-Grgic, whose quickness around the ball had caused Detroit some difficulty, was the first to get sent off, plowing through a tackle at midfield to earn a straight red card in the 111th minute. City's Zeke Harris was sent off three minutes later, after challenging Adria keeper Igor Dimov and skirmishing briefly with striker Derek Huffman, who was himself sent off in the aftermath. A head injury a few minutes before had sidelined DCFC's Ryan Thelen, meaning the game finished drawn at 2 with each team having 9 men on the field. 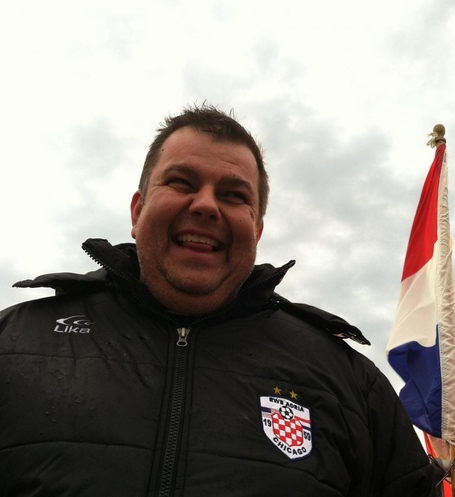 Penalty kicks are no way to pick a winner. Anyone will tell you that. Distilling the energy-swallowing essence of football down to a cold-blooded skill competition certainly favors experience over passion, and once the game was defined in that way, it was strictly no contest. RWB Adria's family men have played together for years, in indoor leagues and outdoor tournaments and pickup games; their almost contemptuous finishing in the shootout was something to behold.

The first two finishes had a ‘top this' feel, with Johnny Morris' top-90 finish just beating out Semir Mesanovic's side-netting job for style points. DCFC didn't have the same fortune, getting two saved and missing on another to make Judson McKinney's successful penalty, the fourth for Adria, the game-winner.

"We're just glad to get through," said a jovial Loncar. "We lost like this last year, in penalties, to Michigan Bucks, you know. Now we've got them again in a week and we'll see."

"We'll need most of the week to recover!" said one of the others in the group, to uproarious laughter. Some of them had a trip across the Port Huron bridge ahead of them, but seemed in no hurry to leave.

Loncar's charges have a chance for some revenge next week, as they visit the same Michigan Bucks side that eliminated them from the Open Cup last year. Detroit City FC opens NPSL play on Saturday against Cincinnati.

It's all to play for, and forever to play it in. As it should be. As it must be.