Vote Early, Vote Often: Shipp Up For Goal Of The Week

Share All sharing options for: Vote Early, Vote Often: Shipp Up For Goal Of The Week

At this point, Harrison Shipp is the best reason to watch the Fire.

It's not just the goals, although they're great. It's also the timing of them. Saturday's game was sliding seemingly inexorably toward disaster when the rookie did this:

It's hardly surprising that Shipp's goal was nominated for Goal of the Week. The guy he feinted into nearly falling over isn't a stiff, it's a centerback who has played well for the Sounders all year, Chad Marshall. Marshall apparently didn't know that Shipp is two-footed, as he seems to assume that Harry's done adjusting himself once he turns the ball to his right foot.

The other thing to notice is the precision of the shot placement. Shipp turns Marshall, then strokes the ball left-footed precisely inside the far post, leaving Stefan Frei - who was tremendous all evening - no chance to make the save. Of Shipp's 19 shots taken this year, five have found the net.

Here's the complete GotW highlight reel, which Fire fans may use as a short distraction.

Shipp was also named to the MLS Team of the Week for his two-goal performance, his second such honor this year. 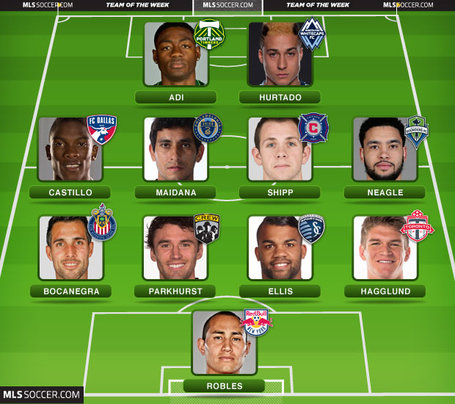