NATAL, Brazil - The first task for us was to pick up our tickets. The default was to get them at a mall in Natal. But, that meant one more task after 21 hours in the air. When we got to Sao Paulo, we had about an hour to catch the flight to Natal. The bag check line and the ticket pickup line were each 30 minutes.  I got in the ticket line and miraculously, it all worked out.

Our hotel had arranged for a driver to pick us up - which was good, because I have no idea how we would find Ge Nipabu beach. Far away from tourist Brazil, so we're enjoying the World Cup with the locals.

Of course, Monday's highlight was US-Ghana. Arena Das Dundas was packed with Yanks but we were one section from the Ghanaians. It was a pure experience. The agony of the Ghana goal followed by the absolute thrill John Brooks' goal. 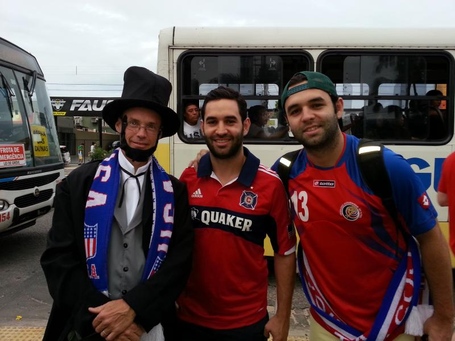 What can you say about that Brooks goal? I've seen the "fans reaction" video that's similar to viral video of Landon v Algeria. But to be in that stadium, 2 sections over from the Ghanaian fans still celebrating their equalizer, priceless. The only real negatives from the stadium experience were 1.) They had just one entrance on the north gate. So it was like waiting to board a ride at an amusement park,  and 2.) No stadium clock. So we were relying on our watches to know the time remaining.

The march into the stadium was electric. The trip out, exhilarating - I even gave an exclusive interview to AP (see video below, 25 seconds in). We headed out, only momentarily delayed by the motorcade for Biden and the big shots.We have met several North Americans staying at our Pousada; after the game, we met up with them to get some pizza and let traffic clear out.