What So Proudly We Hailed: An Interview With AO Chicago

Share All sharing options for: What So Proudly We Hailed: An Interview With AO Chicago

Ever watch USMNT games and see the part of the crowd going wild all game? Those crazies happen to be the American Outlaws, who are the major supporters group for all USA national teams. There are 129 chapters of the organization throughout the country and are in most major and decent sized cities. They plan in-game support for the team, travel to the game and host watch parties for those who can't make it. There is an American Outlaws Chicago chapter and to prepare you for the World Cup, we interviewed 'Jared,' AO Chicago President, about the organization and their plans for the World Cup. 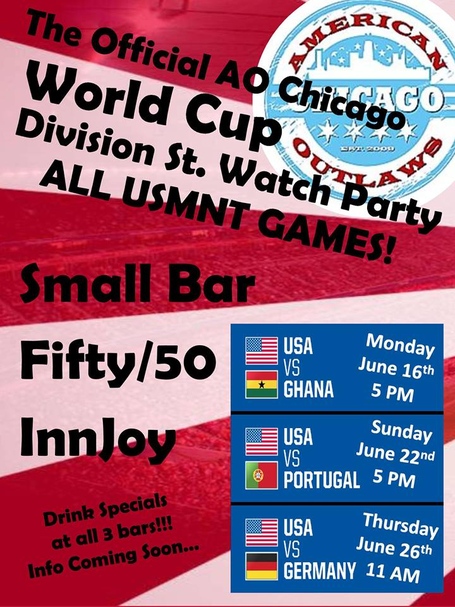 HT: What is your role or responsibility within the organization?

AO Chicago/Jared: I am the President of the Chicago chapter of the American Outlaws. The American Outlaws are the largest US Soccer supporters group in the country with over 125 official chapter across the country. I'm in charge of organizing/growing the group in Chicago. I try to unite and strengthen the Chicago soccer community and ensure every fan has a consistent place to watch games with other people that like soccer as much as them.

HT: How did you first become involved in AO Chicago?

AO: I was on the leadership team for the Kansas City chapter and when I moved to Chicago, they asked that I take over the chapter here.

HT: What do you consider the purpose/goal of AO to be?

HT: Why should someone join AO Chicago?

AO: Officially joining AO will get you an AO t-shirt and you will be supporting the growth of US Soccer fandom. Other benefits include discounted tickets to US Soccer matches before they go on sale to the general public, discounted flights/hotels/rental cars for US games, discounts at World Soccer Shop/Bumpy Pitch, and exclusive access to AO events. At only $25 a year, that's a steal and the bigger we get, the better the benefits will be, so join today!

HT: Does AO Chicago travel to any USMNT games?

AO: Some of our members are at every US game. Whenever there is a game within driving distance, we usually put a bus trip together and go as a group. We sent over 50 people to the US-Mexico match in Columbus last year.

HT: How would you respond to a claim that AO is just a "bunch of guys getting together and partying without much worry about soccer?"

AO: I think that a lot of AO members do like to have fun, but soccer is what brings us together. I'd welcome anyone to find a supporter's group as organized and passionate about our team as AO.

HT: What would you like people to know about AO Chicago?

AO: We meet at Small Bar on Division for every US game, whether it be a January camp game with our "B" team on a Wed night or a World Cup game or qualifier. Any time there is a game, we have a watch party and anyone can show up and catch a game with us. We are a welcoming group and you can come on your own or with a big group.

HT: What are AO Chicago's plans for the World Cup games?

AO: We will be at Small Bar on Division for all the US World Cup matches. Since we are expecting a big crowd, we will also be expanding into Fifty/50 and Innjoy which are the bars on either side of Small Bar (as well as the patios of all 3 bars). All bars will have drink specials and we'll have a number of promotions and giveaways at each of the games.

HT: Will you be doing stuff for non-USA games?

AO: We won't have any official watch parties for non-US games.

HT: Do you have to be a member of AO to attend any of these events?

AO: You do not have to be an official member of AO in order to attend any of our events.

HT: Are any AO Chicago members traveling to Brazil?

AO: Yes, a number of members (20+) are heading to Brazil, both on the official AO package and on their own. AO National is sending a group of 600 members to Brazil on chartered 767 planes. We have transportation to each of the 3 US matches in the group stage which includes a flight into the Amazon to Manaus.

HT: How can people find out and keep track of AO Chicago's plans?

AO: You can officially join the American Outlaws by clicking on http://www.theamericanoutlaws.com/membership. Be sure to designate Chicago as your home chapter and then you'll be on our mailing list. You can also follow all of the latest AO Chicago news by joining our Facebook group (American Outlaws Chicago Chapter) or by following us on Twitter (@AO_Chicago).

HT: Prediction for the World Cup?

AO: I think we will surprise people and advance out of our very tough group. I think our work ethic, athleticism, and ability to adapt to the heavy travel schedule will be the difference. At that point, we'll see what happens and what our match-ups look like.

If you are looking for a fun group of people to watch the game with who share a passion for the USA, these are your guys. Thanks to Jared for taking time to talk to HTIOT, and safe travels to all AO members going to Brazil.