The World Cup is, without a doubt, the most-watched international single-sport event on the planet. Like the Olympics, it offers the promise of financial and PR boosts for the host country although the reality of this is debatable. But, unlike the Olympics, only 32 countries send teams to the tournament. Nonetheless, every 4 years, soccer fans from all over the world make plans to converge for a one month celebration featuring some of the game's most elite players. And this year, like tens of thousands of my compatriots, I plan to head down to sambaland to see this World Cup thing up close and personal. My goal is to get to as many first round games as possible. For me, this is not only the busiest part of the tournament, but also the most enjoyable because there are several games scheduled every day and there are no shortages of David v. Goliath.

For a trip like this, there are 3 critical components; airfare, lodging, and match tickets. The first two are readily available and you're limited only to what your travel budget allows. For the most part, I'll refrain from reporting dollar amounts. But the low-cost options were always considered first. As for tickets, that is where the real adventure lies.
I have never planned a trip to such an event and I've learned a lot in the process of making my arrangements. I have traveled internationally a handful of times in the past. But, this is the first time I had to go to the same place on the same day as several thousand people all vying for the same resources as I am.

My first thrust was to try a travel agent. So, I contacted the AAA agent that put together a great package for Disney World last year. The request was for airfare, lodging and tickets for the first round games. Needless to say, the quote for a full package left me a bit sticker shocked. This meant everything had to be planned a la carte.

The first, and easiest, aspect of the planning process was to book airfare. The good news is that the sites of the US's first and third games are not terribly far apart. So, if the middle game in Manaus is excluded, only a flight in and out of the country is required. After looking at the cost of going to the Amazon, I decided early on that I would probably be watching that game at one of the fan fests. So, this simply meant booking a round trip to Natal.

There's no secret to that process. There are several on-line booking services available that sort out the connection options for you. If you were willing to spend a little time in airports, the prices back in January were fairly reasonable. However, a cursory glimpse at that same site today shows that fares for that same trip are about 40-50% higher right now. So, for future travelers, my advice is to book early. I'm not sure yet how we'll make the roughly 4-hour trip to and from Recife, but there is very affordable bus service between the towns. This will be more of a "wait ‘til we get there."

Lodging was the next thing to check off the list. I'm lucky to have a neighbor that is making the trip with me, which cuts the lodging expenses in half. But this is where my doom-and-gloom prediction almost led me to making a terrible mistake. I don't recall how thoroughly I actually checked lodging options in Natal and Recife, but I know I assumed that costs in those cities would be out of this world. So, I began looking at staying in the beautiful town of Joao Pessoa, which is halfway between the two host cities. It certainly would have been a relaxing and affordable place to stay. But getting to the stadia on game days would have been a bit of a challenge. Plus, we would have been far away from the buzz of the tournament.

Fortunately, after following the comments on some of the soccer chat rooms, I took a closer look at booking rooms in Natal and Recife. I'm so glad I did. I'll put in a plug for Booking.com because I found them to be very easy to work with. We will be in Natal for four nights and then shift down to the town of Porto de Galinhas for the final eight days of the first round. The second hotel even has a small kitchenette which should ease the pressure on the food budget.

The last, and trickiest, aspect of attending the World Cup is getting tickets to the games themselves. FIFA had five main phases to ticket sales. During the first two phases, you could purchase tickets to any game you wanted. But, because this phase takes place before the draw, fans wanting to follow a specific team have no way to know which games they need tickets for. I imagine this is for people that want tickets to the knockout rounds and final, citizens of the respective host cities, and speculators. After the draw, the next phase was a lottery. From December 8 to January 30 you could register for any game you were interested in. There were two avenues for registering; team-specific and general population. To apply for tickets from the US allotment, you needed to register as an official supporter of the federation. After this registration period expired, all available tickets were allocated via a blind draw. We applied for the first and third US games as well as the games being played in Recife during our time there. The fruits of our labors were tickets to only one game, Italy-Costa Rica. Disappointing.

Phase 3 of ticket sales started on February 26. This was the first frantic session of the ticket acquisition adventure. Sales opened at 7am Brasilia time (5am Chicago time). So, at 6:55am, hundreds of thousands of people around the globe had their fingers poised over keyboards. Just before the designated time, I began feverishly, hitting the Enter key to get into the ticket request platform. When the designated time arrived, I was met by this screen: 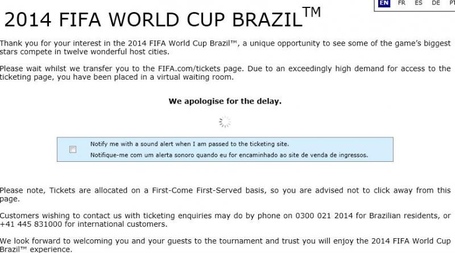 That led to an agonizing wait as I'm envisioning people around the world snapping up "my" tickets. But, at some point, I arrived at the front of the virtual queue and entered in the information for the tickets I wanted. US-Germany was sold out already. But there were tickets for US-Ghana and Mexico-Croatia to be had. I began going through the process of entering the payment information when disaster struck. The computer screen went blank. Although I had the power cord plugged into the computer, the cord had been unplugged from the wall socket so the battery died. My heart sank and I began to curse the gods that were about to ruin my trip or, at a minimum, substantially ramp up the cost. I got everything plugged back in and rebooted but I was at the back of the line again. A feeling of desperate helplessness settled in as I sat looking at the same "your call is very important to us, please don't hang up" message mocking me from the screen. But, apparently, demand for those games wasn't as steep as I'd imagined because 30 minutes or so later, the ordering screen re-appeared and the tickets could still be had. With heart pounding and hands shaking, I calmly placed the order. And with great relief, I received the confirmation. We would be in the Arena das Dunas on June 16 to see the US of A take on the dastardly Black Stars.

Tickets to the Germany game would prove to be much more elusive. With nothing to be had in the first First-Come-First-Served phase, the next option for getting tickets rested with the second, and final FCFS phase which began on April 15. Ticket availability in this phase is driven by people returning their tickets through the formal FIFA channel. I'm not completely sure where these tickets come from but it seems that they are mainly from sponsors or other national delegations that realize they no longer need their allotment and have decided not to put them into the "secondary market". The process is the same as described above. Unfortunately, upon arriving at the front of the virtual line, requests for tickets to US-Germany resulted in: 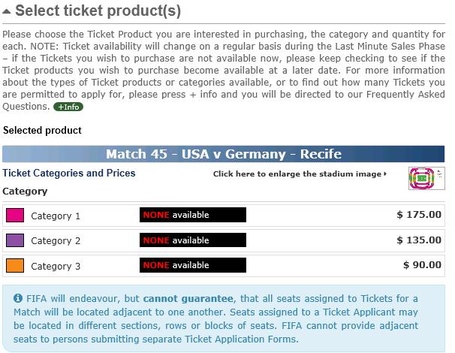 During this phase, availability comes and goes as tickets are returned. There's no way to know when that will be so one just has to check in as often as possible. Occasionally, the site will show availability for this match. But, it is agonizingly deceptive because as soon as someone claims those tickets, they have 15 minutes to complete the payment process. So after you, the latecomer, finish your request (complete with the requisite "enter the bizarre text into the box" task common on ticket sites these days), you are told that the match is sold out. Of course, if the guy that got in first doesn't complete his purchase on time, the tickets become available to the first one to log in at that precise moment. This leaves you banging away at your keyboard until that 15 minute window passes. The experience is not unlike a behavior reinforcement experiment.

Failing to get tickets from the official channel, one is left to venture into the aforementioned secondary market. This is capitalism in its purest form. The easiest avenue is to look at the more popular ticket brokering sites. The range of ticket prices for US-Germany has been about $500 to $800. A little steep for one game. The zeitgeist is that, if you hold your nerve, tickets for such high-profile events can be had for much closer to face value once you're in town and gameday approaches. It sounds too good to be true but I was willing to go that route. But, I also asked myself what I would be willing to pay to have tickets in hand when I got to O'Hare. For me, that number was $300 each. So, when I ran across a guy with two extras that was willing to let them go for $250 each, I decided I couldn't pass on that. So, I figured out how to use Paypal and, before I could say, "We are going to Brazil," an envelope with the two golden tickets was in my hands.

So that's it. All 3 components checked off and now it's just a matter of checking days off the calendar, scheduling a few innoculations, and sorting out my telecommunications options so I can check in with the family during a glorious fortnight immersed in one huge party.