Important details on a variety of events surrounding the summer friendly vs. Tottenham Hotspur. Fire fans will need to come out in force to counter opposition voices. The Fire have reserved all the Pub to Pitch buses possible, so get your seat today!

Share All sharing options for: Fire v Tottenham Summer Friendly On The Horizon 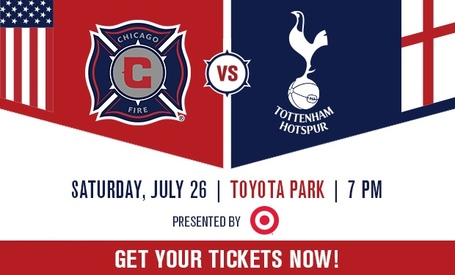 In just over a week - on Saturday, July 26th at 7 pm - your own Chicago Fire will be taking on the Tottenham Hotspur at Toyota Park in Bridgeview. The Spurs, in conjunction with the Chicago Spurs Official Supporters Club, have planned a number of events surrounding the summer friendly, some of which might be important information to Chicago Fire fans.

Spurs fans from around the country - including New York Spurs, Cincinnati Spurs and Philadelphia Spurs, among others - will be joining up with the Chicago Spurs to show their support, so Fire fans will need to show up in force to counter this massive opposition voice. If you haven't gotten your tickets yet, buy now and plan to Stand, Sing and Participate to overpower the Spurs fans cheering section.

Spurs fans are meeting for a "mixer" on Thursday night (June 24) with fans from around the country. Due to their time to connect groups together, Spurs fans will be well organized in the opposition's supporter's section. Thousands of fans are expected. Spurs fans will be spreading out along the east side of the stadium beginning in the South East corner. This match should be a fun time for both sides!

Friday the 25th of July there will be a Spurs open training session for the team down at Toyota Park. The training session will be held at 4 p.m. and will be open to the public if you are interested in seeing in advance the talent that the men in red will be taking on the next day. There may be some opportunity to meet players during the event.

After the open practice, Spurs fans will be retiring to the Atlantic Bar and Grill at 8 pm that evening, the Chicago Spurs home bar. There they will have a Question and Answer session with Spurs leadership featuring Spurs legend Ledley King and Assistant Head Coach Steffen Freund. This event will have limited space and be packed with Spurs fans and is no place for a Fire supporter. Perhaps Fire fans can rally at another soccer bar in Chicago such as the Globe or AJ Hudson's to counter this event?

For Saturday, if you plan to take the Pub to Pitch to the match please be aware! Chicago Spurs are promoting the Pub to Pitch as a means for out of town Spurs fans to get to the match. This is no Aston Villa friendly and there will be many numbers vying for seats on the bus. The Chicago Fire HAVE RESERVED THE MAXIMUM AMOUNT OF BUSES THAT THEY CAN FOR THE PUB TO PITCH AND MORE CANNOT BE ADDED. I would book immediately if you need a seat on the bus. Those buses are ALMOST FULL! Buy now!

Prior to the match on Saturday the 26th, there will be a supporters match on the Chicago Fire's turf practice field next to the Toyota Park parking lot. Fire supporters vs Spurs supporters in a friendly match, set to kick off at 4 p.m. Come out to Toyota Park early and cheer on your Chicago Fire supporters as they take on the opposition's support. This should be a fun time for both Fire fans and Spurs fans.

Kick of for the Fire v Spurs is set for 7 pm. Fans should plan on getting into the stadium early to show their support! This is a chance to show supporters from around the world that Fire fans, American fans, and fans of MLS have just as much passion as Premier League fans.

I, for one, am very excited for this summer friendly at Toyota Park. I am hoping that a positive relationship between the Spurs and Fire can be established, and that the clubs can collaborate on the football side for more deals like the loan that sent Grant Ward to the Fire.

Fire fans, let's make this event a positive experience for Tottenham Hotspur, both as a club and a fan base, and hopefully one day have a new club partner for the Chicago Fire!