Fire continue their brief "Revenge For Games We Should've Won But For A Late, Missed Penalty Tour" at home against Philadelphia

Where: Toyota Park in Bridgeview, Illinois

Where to Watch: TOYOTA PARK, My50, TWCSC

A win and a shutout. That's what we saw last from the Fire, as they traveled to New England last Saturday and took all three points back to Chicago from a suddenly hapless Revolution team. (New England has now lost six straight games after briefly leading the Eastern Conference.) On the other hand, the Fire look to continue winning ways as they host a resurgent Philadelphia Union in what could be the second two-game winning streak of 2014 for the Men in Red. This is a classic six-pointer; these teams are likely to be in the mix against each other for one of the final playoff spots from the East.

Of course, there is also the matter of the last time these two teams met - the first of the Fire wins which magically devolved into draws on late, missed penalty kicks. Chicago controlled large swaths of the fifth match of the season, eventually storming from 1-2 down to tie the game and receive a penalty in stoppage time - but that penalty, taken by Mike Magee, was saved by Zac MacMath, as was its follow-up. Last week against the Revs, la Maquina Roja avenged an earlier late-game penalty miss; will this weekend see a similar outcome?

This week Jim Curtin and the Philadelphia Union come to Toyota Park with both sides needing 3 points. The Union are sitting in sixth place, one point behind the Red Bulls, after beating the side from New Jersey Wednesday night in Philly. The Union won 3-1 with goals from Conor Casey, Fred, and Sebastian Le Toux despite conceding almost 60% of the possession to New York while playing at home.

Since the end of the World Cup break the Union have a respectable 2-1-1 record but have they have played the most games in the league at 20. The Fire have to take advantage of having three games in hand versus Philadelphia and make sure that they take advantage of a team that is finishing up a three-games-in-seven-days stretch. 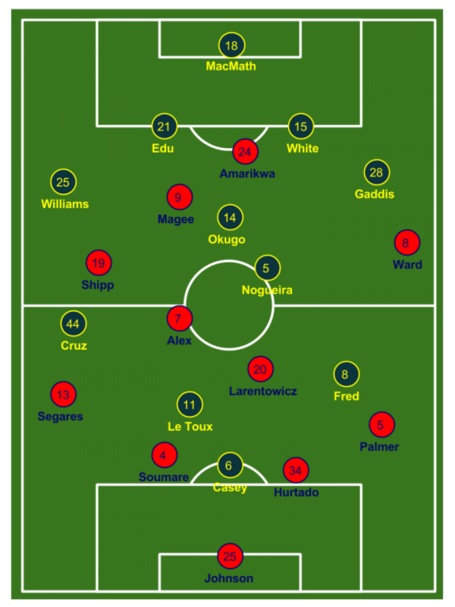 How will the Union cope without Maidana?: The biggest difference in the Union roster this year is the quality provided by offseason acquisitions Cristian Maidana and Vincent Nogueira. Maidana is your classic #10 that is allowed to roam all over the midfield in order to create offensive chances. In the limited time versus the Red Bulls on Wednesday the young Argentine playmaker looked dangerous but went down with an apparent hamstring injury. He won't play tonight, which is a massive loss for the Union.

Nogueira back in the mix: On the other hand, Nogueira is now healthy to step back alongside Amobi Okugo in the Philadelphia double pivot. The Argentine is a true box-to-box midfielder who has been known to get forward to support the attack but has the work rate to get back and help the team defend as well. He's clearly a leader - prior to joining the Union, Nogueira was the captain of Sochaux in France's Ligue 1 - and is a calming presence in the midfield. These 2 players are going to be Union mainstays for years to come being that they both are getting into the prime of their careers.

Union will bunker and counter: Under former Fire stalwart Jim Curtain, Philadelphia has consistently eschewed trying to keep the football, instead focusing on a keeping a solid defensive shape and breaking forward on mistakes. And it's working, in large part; by letting Red Bulls keep the ball and flow forward into possession, there were acres of space for red-hot Conor Casey, Seba Le Toux and Maidana to exploit. Without Maidana, playing their third game in seven days, and now on the road, expect this tendency to be very pronounced.

Fire need to keep the ball: For all the brave talk in preseason about playing attractive football with la pelota on the deck, Chicago's actual possession game has only clicked intermittently. In the last seven games, the only time the Fire had more of the ball was in the 1-1 home draw with Toronto, when the Reds played a man down for more than an hour.

This has to change especially at home to an Eastern Conference opponent. Yes, we could be giving up the possession to play a counter attacking style of soccer - but I don't buy that, because this Fire team is not set up with players that can break quickly to catch the opponents off guard, in my opinion. The Fire have to be able to hold onto the ball in order to create offensive chances. There are not many teams in the world that can give up that much possession and expect to compete for silverware, it's something that just doesn't happen.

The Men in Red are better rested, and the classic formula for grinding down tired opponents is keeping possession, passing simply and making the other team chase. If Chicago can do that, expect three points.

The Fire need this one. Yallop and company need to win in order keep the momentum and spirits of the team going in the right direction. Can the Fire's defense contain the three-pronged attack of Andrew Wenger (or Fred, or whoever), Conor Casey, and Sebastian Le Toux? Will they be able to take advantage of a team that already played midweek?

I certainly think so. I'm going to say that the Fire put their stamp on this game and go on to win with a 2-0 scoreline. This starts the second half of the season for the Fire; they must finish strong if they have any hope of making the playoffs. Based on the amount of points that was needed to make the playoffs in 2013 - 49 points - the Fire will need a record of 9 wins, 3 draws, and 5 losses the rest of the season to be in the mix. Not impossible, certainly, but a jump upward from the results of the first half.