(By guest correspondent Daniel Casey, who writes about soccer among other things. Follow him on Twitter at @misanthropester.)

Unlike other NASL teams during the league's midseason break, the Atlanta Silverbacks haven't played any friendlies. One has to wonder how sharp this team will be ahead of Wednesday's US Open Cup quarterfinal match against the Chicago Fire - but an unconventional approach is par for the course with this erratic franchise.

Some quick context: The Atlanta Silverbacks have never been a good team. Even before the USL/NASL split, the team was perennially low-to-middling. This all changed in 2012 when Eric Wynalda became involved. Coming to Atlanta off of a strong showing for his amateur Cal FC squad in the US Open Cup, Wynalda was brought in to turn around a club that seemed only able to lose matches.

Atlanta will be without Poku, Chavez & Carr, its three best attacking threats

He did it - and even though Atlanta had dug itself into a deep, dark hole, Wynalda's leadership brought the team wins and hope. Come 2013, Wynalda stepped down as manager while staying on as technical director; his hand-picked manager Brian Haynes, was able to get Atlanta into the NASL final.

However, Haynes wasn't able to keep the team focused in the second half of the NASL season. The Spring victors allowed themselves to play lazy, poor football, as every player fell out of form just in time to face the New York Cosmos in the final. Atlanta lost, capping what had begun as a promising season with a display of unmistakeable deterioration. When the season ended Haynes, who was named NASL Manager of the Year, was let go and Wynalda again assumed the mantle of manager.

Convinced he needed to continue to push the envelope, Wynalda announce an alternative kind of management. The head coach position was eliminated leaving Wynalda to be the manager and technical director. The move was met with a good deal of skepticism and not a small amount of mockery. The decision actually puts Atlanta into the mainstream of world soccer. Although the speculation Wynalda would use Skype and online streams to conference and scout opposition justifiably leads one to wonder if he is in fact playing the most realistic version of Football Manager available.

All this is often cited as a reason to discount not just Wynalda, but Atlanta. Such a hand-wave ignores the fact that under Wynalda, the Silverbacks have recently produced players who've quietly made a niche for themselves in MLS - Mark Bloom & Chris Klute. This season Atlanta has two more attackers who could very well make the jump to MLS -Kwadwo Poku (who this last week trained with the Seattle Sounders) and Jaime Chavez (whose five goals over nine games gives him a share of the NASL's top goalscorer title). The plain fact is, Wynalda knows talent and he knows how to put a team together. His managerial style is hands-off to a certain extent, which is why the ‘new approach' in Atlanta could work.

As of yet, the system in Atlanta isn't doing so well. For the first half of the NASL season (albeit a shortened to nine matches due to the World Cup break), Atlanta could only muster an 8th place finish at 3-1-5 giving up the most goals in the league (20) while being among the bottom in goals scored. Atlanta has tried to be mutable with its line-ups, but essentially they fall into a 4-3-3 with Poku acting as a playmaker behind Chavez or Deon McCaulay with midfielder Blair Gavin as the linchpin for all action. However with Poku, Chavez, and winger Borfor Carr absent due to the red cards picked up in the Colorado debacle the team will likely put McCaulay up top alone and field a 5-4-1. 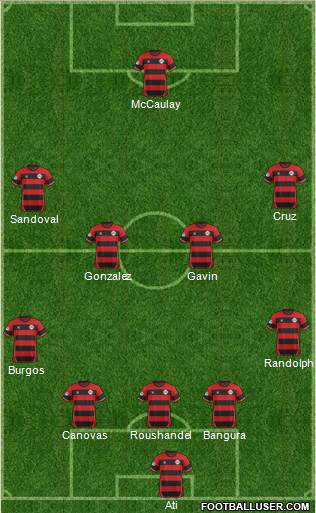 I suspect Atlanta, being shorthanded, will rather pack the backline. The leadership of Mike Randolph will be key in the defense. The journeyman wingback will be one of the main threats from Atlanta. Look for a bench that will resemble this: Derby Carrillo (GK), Edgar Espinoza (D), Beto Navarro (D), Janny Rivera (M), Lucas Paulini (M), Alex Harlley (M); Kellen Gulley (F). There will be no reason for Atlanta to not leave everything on the pitch because their bench will present no fireworks or super-sub options.

What distinguishes Atlanta's style of play is its love of drawing and committing fouls. The team is fourth in the NASL in fouls and is tied at second for the most yellow cards. The melee in Colorado saw those three starters ejected as well as Wynalda and assistant coach Ricardo Montoya. Chavez in a less than sporting manner stomped on the face of Rapids defender Drew Moor which led to brawl between Chavez and Marc Burch. That scuffle was enough to drum up the ire of Wynalda who not only came out onto the pitch but had to be pulled away himself. The scene has not only hamstrung Atlanta (in all likelihood leaving Wednesday's managerial duties to second assistant Alejandro Pombo) but revealed a fundamental characteristic of team's style.

Atlanta - like their manager - can only dish it out, then cannot take it. This is perhaps the most disturbing aspect to the team. Wynalda could be a superb MLS manager, for both the neutrals and the diehard supporters. Yet he imbues players with an unearned arrogance that expresses itself most often through indignant, dirty play, believing themselves victims of imaginary offenses and false slights. It is maddening because the Silverbacks boast some genuine talents.

McCauley should be familiar to those spouting their love on CONCACAF throughout this World Cup. The Belizean was - alongside Robin van Persie and Luis Suarez - the world wide co-top goalscorer throughout qualification with 11 goals. Take it with a grain of salt, but McCauley is no slouch, even though he has been eclipsed in Atlanta by the even more obscure Chavez (a fact that speaks to Wynalda's ability to find and draw talent). Former Chivas USA regular Blair Gavin has been a stalwart for Atlanta this season, and is the prime conduit from which springs its attack. The easiest way for Chicago to shutdown Atlanta will be to bottle up Gavin. Doing so will make the speed of this team moot.

With their three most dangerous attackers suspended, Atlanta is in desperate need of cover up front. On Monday the team announced the acquisition of a name that should be quite familiar to Chicago Fire faithful - Kellen Gulley. The once-homegrown player for the Fire will now ply his trade regularly for the side to which he was loaned out for most of last season. Perhaps a glimmer of hope for Gulley's career, but no cause for concern for the Fire. Gulley's stint in Atlanta in 2013 was highly unproductive, and it is extremely unlikely that he will start Wednesday.

Chicago's recent performances have not been good enough. If the Fire play like they have against Toronto FC and Sporting Kansas City, then they will lose to Atlanta. Suffering a death by a thousand cuts, the Fire need this year's US Open Cup in order to salvage pride in the season. Fortunately, the Fire have had a good run of play in the tournament this year, and although they are enduring a crunch of games I expect them to field a strong team.

The victor of this quarterfinal match will travel to face either the Seattle Sounders or Portland Timbers on August 13th.