The game is available as a stream from chicago-fire.com; kickoff is at 9:30 CST

For thoughts about tonight's US Open Cup semifinal against Seattle - a game against a club the Fire have never beaten, on a surface that has been Chicago's nemesis, in a place where the Sounders have never lost a competitive game - I give the Men in Red an I Ching hexagram to ponder: One of my favorites, "Biting Through:" 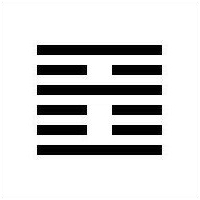 "I don't think there's anything in Creation that lightning can't cut through. That's the principle of BITING THROUGH; nothing is immune to the imperative of Light ... and sometimes we need a good crackling in order to perceive a truth and to act on it." - from ichingquotes.blogspot.com

Tonight's starters will have an opportunity to perceive a truth (that CHICAGO FIRE are KINGS OF THE CUP) and act on it - and it's the best XI the Men in Red can muster today:

Seattle - rotating their XI like mad in an effort to continue the team's barnstorming MLS form - counters with a lineup that's more than one-quarter former Fire men:

If you're wondering when Clint Dempsey will come off the bench, the answer is 'not tonight,' as Dempsey was left off the 18 entirely. They do have usual starters Obafemi Martins, Chad Marshall, Leo Gonzalez and Gonzalo Pineda on the bench should things not go their way.

Join us here as we exult or lament the tale told by our flickering web-streams, Fire faithful. They're favored; they're homestanding; they're big and only getting bigger. We here in red are just Biting Through, and hoping to apply some long-awaited punishments.