Toyota Park's field has gone from bad to worse over the course of 2014, and the players have had enough of it

The players' frustration at the increasingly unplayable surface at Toyota Park went public tonight, when rehabbing star Mike Magee weighed in on the choppy, patched turf in a tweet for the ages:

Bakary Soumare, fresh off a crazy night in the Nerf pit, gave Magee's tweet the thumb-up:

Seriously!! "@magee9: @ChicagoFire Trying to play soccer on our $h1+ field is like trying to play hockey with a football."

Former Fire man Chris Rolfe, in town despite being sidelined with a broken arm, said this:

It's embarrassing how bad this @ChicagoFire field is #CHIvDC @dcunited

There was a time that the playing surface at Toyota Park was one of the best in the league - dare we whisper 'best-in-class'?* - good enough that visiting European squads would remark upon it - dense and slick, soft on the knees and very consistent. Those days are long past. This was the Toyota Park pitch this evening before kickoff:

Here's a good look at the field from 2007. It wasn't always this way. The goal nearest the camera has a massive, loose re-sod before it; its lack of root development means that it's chopped up terribly. 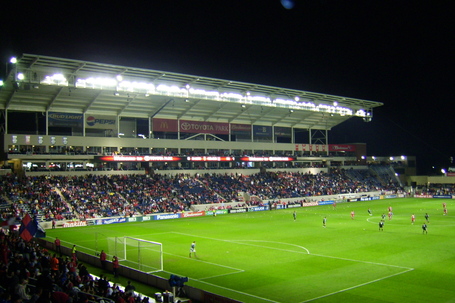 If this is how Bridgeview is going to keep the field, then maybe it's time to divert some of that Quaker money from branding-advice deals and make the surface once again one of the best in North America. If there's a deeper story, I'd love to hear it. And, by the sounds of it, the players would, too.

* Legend has it that if you put on a 2014 Chicago Fire home jersey, turn off all the lights, and whisper 'best-in-class' three times into a mirror, that Atul Khosla will appear and offer to rearrange your furniture. Legend ... has it.