Men in Red probe and probe but cannot find a breakthrough on a hot, sluggish day near the Buffalo Bayou

As the sun pulls away from the shore, and our club sinks slowly in the East,* we bring you the story of the game I could not see.

Y'see, MLS favors its 'designated partners' a great deal more than it favors the fans who've actually paid to see the games. If you're one of the lucky folks who were able to get to a watering hole and convince the bartender to change one of the television monitors off of American football to see this one, I salute you. If you're one of the surely dozens of households who tuned into UniMas at their home to watch, well played. Because, as this game unwound, the writer of this story was in a sort of modern version of the ticker-tape days, 'listening' to a twitter feed and watching the sparse highlights that cropped up on MLS' website.

Univision money even brought us a lovely 2 p.m. start time in Houston, one of the hottest, swampiest cities in North America. The players were doubtless delighted to have their fall interrupted with a game played at 90 degrees and 90 percent humidity, 40 feet above sea level. Dynamo fans celebrated the weather with a bring-three-ghosts-with-every-live-person promotion, judging from the number of apparently unfilled seats left despite an announced crowd of 20 thousand and change.

I'm tempted to pretend this was written live as a sort of callback to Harry Caray's start in radio - on away days, the ticker would give him pitch-by-pitch updates, and he'd act as if he were there, striking wood on wood to make bat sounds but otherwise carrying off the illusion through pure enthusiasm and chutzpah. Alas, I will not. I didn't see a moment of this until it was done and dusted, another dispiriting outing in Houston already moldering in the record books, never to be thought of again.

For the record, the Chicago Fire lost the game, 2-0, to the Houston Dynamo. The loss is the club's eighth in 29 - a record that might seem promising were it not for the inconvenient fact that, of those 29, the Men in Red have won only five. Every team below them in the overall standings - and there are only three - has won six, and the teams above them have won at least eight.

The highlights tell the story of the game - Sean Johnson was magnificent on an evening when the rest of the squad was second-best. Maybe it was the heat, or the stretched nature of the squad on a day when two starting defenders were suspended, but the Fire seemed ill-at-ease from the beginning. Chicago's formation was listed as a 4-3-3, with first-time starters Robert Earnshaw and Florent Sinama-Pongolle joining Quincy Amarikwa in the forward line, but it played like a bog-standard 4-4-2, with Sinama-Pongolle dropping into central midfield, especially after Razvan Cocis left with a concussion after 26 minutes.

Houston probed repeatedly down the Fire's right side in the early exchanges, hoping to test soon-to-be-retired Logan Pause in his less-familiar role of right back. The first goal came in the 15th minute from that position, as Ricardo Clark - fresh off the elbow which would eventually sideline Cocis - overlapped Brad Davis deep into the corner and curled a left-footed cross across goal. Jeff Larentowicz and Gonzalo Segares had Houston's Omar Cummings bracketed on the far post, but Larentowicz' moment of ball-watching came too late for him to cut out the cross and too soon for him to mark the speedy striker, who bundled the ball into the net. 1-0, Houston, and the Men in Red looked as wobbly as Cocis.

Perhaps the best sequence of play in the match resulted in no change on the scoresheet. In the 37th minute, Houston's Oscar Boniek Garcia took an outlet in midfield and found himself with no pressure at all. Stepping into the space, Boniek Garcia - playing from the left channel still short of midfield - spun a pass forward with the outside of his right foot to Giles Barnes, who was sprinting into space paced by Larentowicz. Barnes touched the curling ball down with his right instep, then used the other side of the same foot to attempt to chip Johnson in the Fire goal. Johnson's back-leaping one-handed tip over the crossbar was the third highlight-reel play in 10 seconds, and spared the Men in Red going down two goals before halftime.

The second half saw a renewed emphasis from Chicago on keeping the ball, which suited Houston's counter-attacking intent nicely. The Fire found some rhythm in pass-and-move sequences, their 4-4-2 shape made slightly lopsided with Shipp pinching in and Segares slightly advanced on the left, but - as has often been the case this season - could not find the cutting final ball to make a clear chance. Of the Fire's 12 shots, five were blocked. But the Men in Red kept the ball for most of the second half, and encouragement could be found somewhere near that fact, if one squinted hard enough. 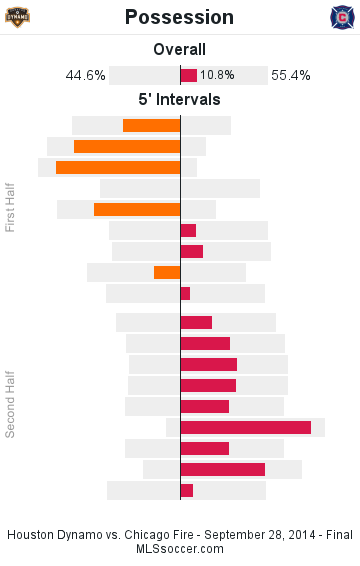 The second goal would have been difficult to deny in the best of circumstances. The Dynamo's Luis Garrido found Kofi Sarkodie overlapping on the right, and Sarkodie's deep cross fell to Brad Davis on the opposite side of the penalty area. Davis, spotting Boniek Garcia ghosting toward the penalty spot from the right, headed the cross back to the middle, where the Honduran livewire finished with a left-footed volley that rippled the net before Johnson could react. 2-0, Houston, game over, lights out.

The Fire are left a bit battered and certainly weary, and must travel to the east coast to play a Philadelphia team that's surely desperate for a win. The Union are only three points out of the playoff spots, and this midweek matchup is their game in hand - meaning a one-goal win would catapult them into a tie for fifth, and a win by two or more would see them in fifth all alone with four games left.

On the upside, the game will be viewable without the need to kidnap a bartender's family. MLS fandom is an odd beast sometimes.

Chicago (5-16-8) visit Philadelphia Thursday evening before returning to Chicago to host Montreal on Sunday. Houston (10-6-13) will test its playoff bona fides starting Saturday in New York against the Red Bulls, one of the three teams it will need to leap-frog to make the postseason.

*All due apologies to The Firesign Theatre.